time for a short update again. Last thing I reported on was the gig with the Platformers mid of May. Afterwards the recording sessions for my new album continued, interrupted by a trip to Tel Aviv, and then I spent the second half of June in Denmark with my loved one. We really needed the rest, and I did nothing musical at all in those two weeks. Besides all the tunes that kept going on in my head, but that’s normal, at least for me.

Back from vacation, I had a rehearsal session with Chris O and his family to prepare for a gig at their garden party some days later, followed by two recording sessions for the new album again. Then a rehearsal session with the Erratics in my basement due to the fact that their room got flooded at one of the strong rain falls end of May, and then the next gig with ‘em took place in Schweinfurt, at the Montana once more. Another recording session this week, and next week there’ll be just another one plus a rehearsal with the Platformers. I’m back again at full speed.

Chris O’s garden party is a sort of tradition, at least it was the third event of this kind in the last 10 years. There were some 30 people attending, and we played an interesting mixture of old Heartbeat stuff (Help, She loves you, I can her your heart beat, Beast of burden etc.), songs selected by Chris and his family (Mighty Quinn, some other Gotthard stuff, Perfect by Ed Sheeran) and also three songs of mine, where Nicole joined us in singing (I don’t care, Time and time again, All the things). We’d have done some more, just Nicole and myself, but time was running out and the O’s didn’t want to stress their neighbours after 10 pm, so we had to give in. A pity of course. It would have been great fun for sure.

The gig with the Erratics went quite well, even if we had to play much quieter than we usually do. The event was not intended to be a rock concert but more of a get-together in front of the shop with some music in the background. And so we stood in the shop and rocked ourselves through our programme, some people stayed just close to us, but the majority sat outside and enjoyed the evening and the summer breeze while we played the blues from a distance. But it was a good performance and a good opportunity to listen to ourselves and interact.

Felix, the other guitar player (or better: their lead guitar guy), is quite a good musician and a good mate to play along with. We’re getting closer in understanding each other and agree on the next solo while looking or nodding at each other. When joining the band again, I didn’t have any ambition to play the solos, it was his job and he’s doing great. But he likes my style of playing which is quite different to his one; he’s in a way more sophisticated, he’s got a lot of sounds with his Camper amp, he’s good in using all sort of effects, and he’s basically a Stratocaster player, while I’m a completely puristic one with my good old PRS plus a tube amplifier and nothing else. Guitar, cable, amp. No effects or gimmicks. I like the variety of sounds and styles in his solos, and he likes the punch and energy of mine. As you can imagine, it is pure fun for me to play along with him.

I asked him to do a solo on my album which I tried to play by myself but still was unhappy with the result; he said yes after some days. It’ll be the one in “Soldier in a lost patrol”, and I’m excited to hear him playing in this song with his bluesy style. It’s one of my favourite songs of the new album, and I needed some time to accept that somebody else could do it in a better way than me, but first of all I’m convinced he can, and secondly I am on my way to learn to share. Slowly but steadily. At least I think so…

Next week there’ll be another recording session with Albrecht, the trumpet guy, and a rehearsal with the Platformers as well, but then there’ll be a break of some four weeks with hardly any musical activity at all due to the fact that Chris D, my multi-talented and highly esteemed companion, will be on vacation with his family. Well, he’s deserved it for sure, and I’ll find some moments to sing and play in my basement in the meantime to stay tuned.

The next gigs are not really fixed; there are some projects ongoing with the Platformers and the Erratics, but nothing’s completely clear. I’ll keep you posted, as always.

Please see at amazon or itunes 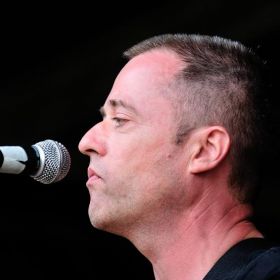 Born 1964 in Stuttgart/Germany. Singer, songwriter, arranger, guitar/bass/drums player, session musician here and there. No contract, no label. No commercial interests.

Singer and guitar player with PAMBAND from 1989 to 1996 and since the PAM reunion in 2011 again; with Platform No 6 since their foundation in 2009, and now with Schnoed & the High Field Band since the beginning of 2016.