Thanks for making Madooo Rank #1 for Rock Genre in Philly and also rising in Global Ranks.

His ‘Beatles Tribute’ CD, “To The ‘Fab Four’ From Liverpool ... A Tribute From India” has 12 Beatles songs in a fantastic blend of the East and West. There is something in it for everyone and the description of the flavor of each track is outlined below. Please spread the word and share!
TRACK LISTING:
1) Norwegian Wood (Lennon/McCartney) 60s Classic Rock style with an Indian touch
2) Youʼve Gotta Hide Your Love Away (Lennon/McCartney) A touch of Hip-Hop feel with an Indian blend
3) Ob-la-di Ob-la-da (Lennon/McCartney) Reggae/Caribbean flavor and Indian percussion
4) If I Needed Someone (George Harrison) Indo-Rock fusion
5) You Canʼt Do That (Lennon/McCartney) Rock nʼ Roll with Indian percussion
6) Love Me Do (Lennon/McCartney) Straight ahead Rock with sitar
7) Gotta Get You Into My Life (Lennon/McCartney) Classic Rock style with tablas
8) Across The Universe (Lennon/McCartney) Classic Rock with an Indo-psychedelic flavor
9) With A Little Help From My Friends (Lennon/McCartney) Indian Raga-type arrangement with a Rock blend
10) I Saw Her Standing There (Lennon/McCartney) HOUSE/TRANCE flavor with Bhangra percussion drums
11) Things We Said Today (Lennon/McCartney)
12) The John Lennon Tribute (Medley) Imagine/Watchinʼ The Wheels/Give Peace A Chance (Lennon). It has radio voiceover from day after John's death
USA REVIEWS
“You have done a great job of your interpretations... It looks like you are a very good part of the global scene in a very big way to me... Congratulations Madooo… It is a great contribution to the fab four's legacy...” – (The Late Great Richie Havens - 2009)
“This album is incredible...an Indian music-salute to The Beatles” - Archer Dusablon - Host of 'Beatles Basement’.
Madhu, you are one brilliant singer/performer/human being. Bravo to you! - Paul Saltzman. President: ‘The Beatles in India’; President: ‘Sunrise Films Limited’.
Madooo’s Beatles Covers and his originals are available on iTunes & CDBaby
https://itunes.apple.com/us/album/to-fab-four-from-liverpool/id16020792
https://www.cdbaby.com/cd/madooo
https://www.cdbaby.com/cd/madooo2 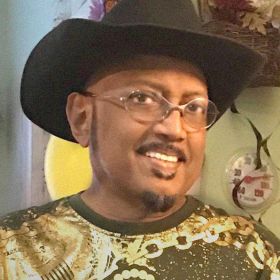 Madhukar C. Dhas aka Madooo is a Singer, Songwriter and Performer based in NYC.
Indian-born pop vocalist Madhukar Chandra Dhas, who sings under the name Madooo in USA, grew up in Chennai, India, where his father expected him to become a doctor. But he formed a band, the Voodoos, at boarding school and became interested in art while attending Madras Christian College.
After school, he moved to Bom ... read more